What Parents and Carers Need to Know About ‘Rec Room’

Rec Room is another one of those games which surged in popularity during the pandemic. It’s user base trebled in 2020, as players realised that the platform’s ‘open-world’ nature and interactivity were a way of replicating social contact. In-game events reflected that, with rooms set up to happy hours, birthday parties, maths tutorials and even therapy sessions.

Rec Room became an unexpected breakout hit on the Xbox after its release on that platform towards the end of last year. As a more sociable alternative to the fast-paced, hyper-violent titles that historically dominate the Xbox game charts, its only real rival is Roblox – which is played almost exclusively by under-16s. With such a young user population experiencing the intensifying nature of virtual reality gameplay – as well as having the ability to chat privately in-game – it’s easy to see why many people have voiced safety concerns. Rec Room is kidSAFE certified, but worries over online bullying and inappropriate content have persisted. 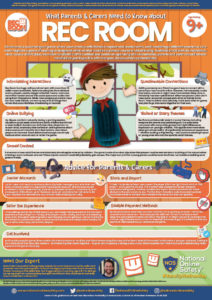